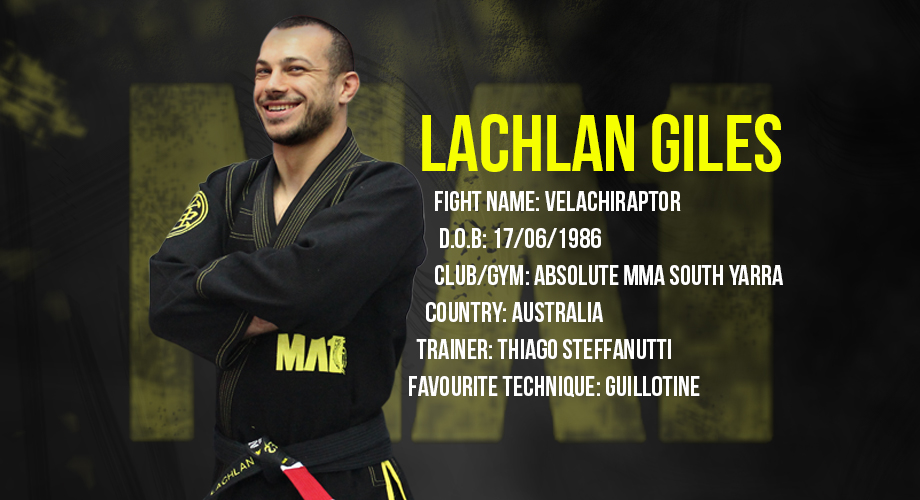 "I played Australian rules football, tennis, cricket, and basketball until the age of 14. When watching a Jet Li  movie called Shaolin Temple convinced me to try out a local kung fu school.

About 12 months into my training my coach showed me a video of UFC 1 and that got me interested in Jiu Jitsu. After my first BJJ class I was hooked and have been training since then. I recieved my black belt in 2012 from John Simon. I've competing in BJJ since 2002 but most of my competition success has come in recent years.

In 2014 I won the Australian Middleweight GP, and my weight division and open weight for gi and no gi at the Pan Pacific Championships.

In 2015 I represented Oceania at ADCC Brazil, have won the Australian Abu Dhabi pro trials twice, and have competed on BJJ showcase events such as BOA Super 8 and EBI.

I coach BJJ out of Absolute MMA in South Yarra, and this year (2016) our team (Absolute MMA) came first place at the Abu Dhabi Pro qualifiers, which is the most difficult competition in Australia."

Lachlan is a first degree BJJ black belt. At ADCC 2019 in the Absolute division, Lachlan as one of the lightest competitors (under 77kg) submitted 3 world class heavyweights (Kaynan Duarte, Patrick Gaudio and Mahamed Aly) all by heel hook. At Kinektic Invitational 1, a five vs five grappling event, Lachlan single-handedly swept the entire team, submitting them all, 4 by heel hook and 1 armbar. He is the 2017 IBJJF No-Gi World Championship Bronze Medallist, 2014 Australian Jiu-Jitsu Grand Prix Champion, multiple time Pan Pacific and Victorian Jiu Jitsu Champion. He has represented Australia three times at ADCC, the most prestigious submission grappling competition in the world, represented Australia three times at the World Pro Championships and competed at the Eddie Bravo Invitational where he submitted former ADCC Champion Rani Yahya. He also works as a physiotherapist and in 2016 completed his PhD.

The mental aspect: Problem solving of techniques as well as strategies and trying to get the most out of your training.

It's the best thing you will ever do. Just keep at it, BJJ is hard at first because you end up in bad positions a lot. The best thing about it is the more time you put in, the more reward you will see in terms of improved rolling.

The top competitors who put it on the line. There are too many to name, they get to show us what technique works and how it stacks up against other high level technique.

What music are you into?

All, but we have a lot of rap playing at the club. I don't listen to rap much outside of training but I think the beat is good to keep you motivated during training.

I've travelled quite a bit so I'll say somewhere I haven't been but would like to go: Antarctica.

My competition days will be behind me. I'll try to be that tough old guy at the gym that can still give the competitors a good roll.

What would you be doing if you weren't fighting?

Some other exercise or sport, and focus more of my time on my physio and research career.