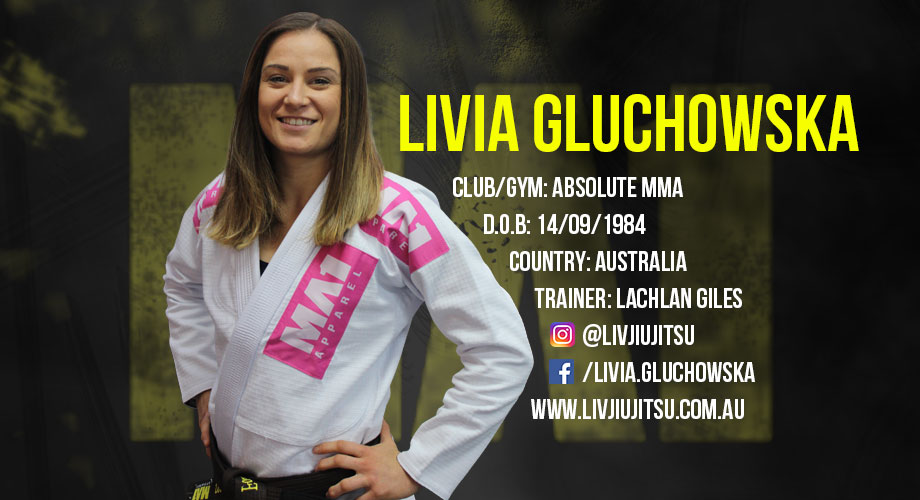 Livia started her athletic career early in life, representing Poland and Australia in rhythmic gymnastics for 10 years and retired at the age of 18. After feeling like she wasn’t done with competitive sport she took up sprint cycling, where she had some encouraging results nationally, but wasn’t quite able to take it to the next level. She decided to go to university and give up on her sporting dreams, however it didn’t take long until she got the itch to do something competitive again. Initially taking up BJJ just as a way to keep fit and to have fun, it wasn't until completing a Bachelor of Physiotherapy degree in 2011 that she began training seriously.

Since then Livia has became the first female in Australia to win 2 World Championships in one year, in 2 different belts.

Livia Giles is now a BJJ black belt, 3-time BJJ World Champion, 2-time Asian Champion, 11-time Pan-Pacific Champion, 3-time Australian Champion, Abu Dhabi Pro Trials Winner and 2017 IBJJF No-Gi World Championship Silver Medallist. She was the first Australian to win at Copa Podio, a renowned showcase event in Brazil, and she has represented Australia twice at the Abu Dhabi World Pro Championships. At the end of 2014, she was ranked at #2 in the world in no gi BJJ and #4 in gi (purple belt, light feather) and #1 in Australia in both gi and no gi (purple belt, open weight).

She is also a physiotherapist and has worked for the Australian Institute of Sport. Before taking up BJJ she was the 2003/04 Track Series Australian Cycling Champion and has represented Poland and Australia in rhythmic gymnastics.

I have retired from competitive sprint cycling and wanted to keep fit and found fitness kickboxing a little boring. I tried a Jiu Jitsu class and was hooked ever since then.

I love the sense of community and the friendships made with fellow BJJ fighters. I love that I can train hard with my teammates and competitors and still remain close friends.

Seeing my students and teammates improve and succeed is an amazing feeling, as well achieving my personal goals. I also love that it keeps me fit, focused and you never stop learning.

Have fun and stick at it. It’s a journey worth taking.

I have many. In the sport of jiu jitsu it would have to be my partner and coach Lachlan Giles - he is humble, driven, kind and has a very intelligent approach to learning.

I look up to the females in BJJ, like Michelle Nicolini and Luiza Monteiro who have paved the road for my generation of fighters - being a female in a male dominated sport is not always easy.

I learn a lot from many different fighters such as Marcelo Garcia, Cobrinha, Michelle Nicolini, Mendes brothers, Leandro Lo, just to name a few.

I would love to check out the Maldives.

Hopefully still practicing jiu jitsu every day, running a successful BJJ academy, coaching and mentoring a female BJJ team. I will probably get started on my physiotherapy Masters or a Phd at some stage too.

What would you be doing if you weren't fighting? I would probably find another sport or hobby to obsess about. And I would still be working as a physiotherapist, but perhaps dedicate more time to it than I am now.